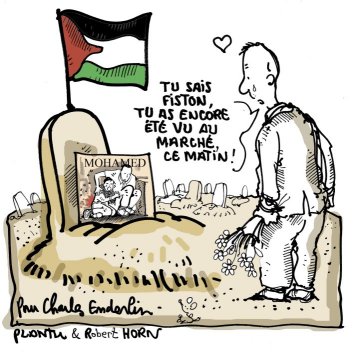 I had reposted the video to my account but it was censored.

**Charles Enderlin (born in 1945 in Paris) is a French and Israeli journalist and reporter. He is the Jerusalem correspondent for the France television channel. 2.

Would the impostors have won ? Since the very surprising judgment handed down by the Paris Court of Appeal, who released Philippe Karsenty on somewhat contradictory grounds, Charles Enderlin's enemies exult and trumpet him over and over on community media : the report on the death of Mohamed Al Doura was a fake, a pure staging ! The president of CRIF believed he had to validate this thesis without the slightest reservation.. And by ignoring a number of truths that must still be remembered … suite (….) (the page has become untraceable, the 17 August 2020)

That sows doubts, reap the questioning of their own sincerity… Nothing stops them.

They even prey on bona fide individuals, from their own community, to impose their ideas … Masters in the dictatorial…

Journalists’ freedom of expression threatened by the world's largest dictatorial lobby … They try by all means to distort even established and proven truths to avoid or curb the awareness of the citizens of the world..

Champion in creating doubts in the minds of listeners…

How far will they go to kill free speech?

And what will be the consequences?

One more article too: HERE or HERE

Douglas reed analysis ” of the Protocols of the Elders of Zion “