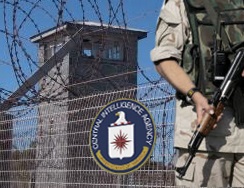 Citizens transferred by the CIA to secret prisons on behalf of US policy.

18 November 2009 – The The CIA built one of its prisons secret Europeans at an exclusive riding academy outside Vilnius, in Lithuania, a Lithuanian government official and former US intelligence official told ABC News this week.

‘The activities in this prison were illegal’, said human rights researcher John Sifton.

Lithuanian officials provided ABC News with documents of what they called a CIA shell company, Elite, LLC, who bought the property and built the “black site” in 2004. [..]

Lithuanian prison is one of many in Europe, according to officials.

Other documentary on the subject

Sarkozy had been put on a stamp by the Palestinian Occupation Entity before becoming Predict?