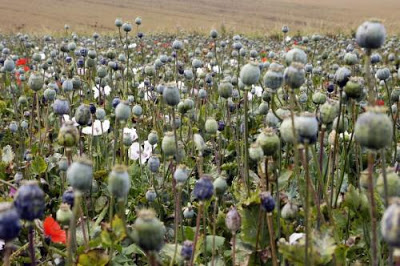 Article from 19 avril 2005 FROM voltairenet.org
Since coming under the control of NATO stabilization forces, Afghanistan has become the world's largest producer of opium poppy. This commodity is refined in Pakistani secret service laboratories and provides the bulk of the Gross National Product of Afghanistan and Pakistan, both become narco-states. Far from benefiting the populations, this windfall is used to buy US weapons in anticipation of the attack on Iran. 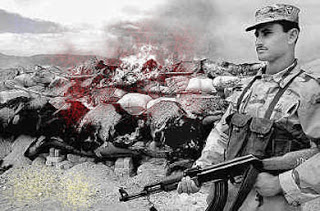 Immediately after the attack on Afghanistan by the United States and the overthrow of the self-proclaimed Taliban emirate, President George W. Bush sent a special envoy to assess the situation. In his report, James Dobbins said: "Drugs are the main source of money to finance reconstruction, greatly exceeding cumulative international aid ”. This observation is not denied. In three years, opium production has skyrocketed. Today it spans 130 000 hectares and represents 87% of world production. In this devastated country, there are in fact no other sources of wealth, except international aid, observes New York University professor Barnett Rubin[1].

This phenomenon is unanimously deplored by international leaders. Yet it is impossible that it could have grown to such a scale without the approval, at least tacit, new masters of the country, that is, the army of the United States and NATO. This collusion is now an open secret, even if no politician dares to approach it in public. One exception however: the French Minister of Defense, Michèle Alliot-Marie, did not hesitate to express his irritation in the columns of the Washington Post. She regretted that the GI's did not feel concerned by this traffic which supplies the only European market and let it take place before their eyes., even as they asked for military aid from the Europeans to stabilize the country[2].
To understand what is hidden in this vast tartufferie, a step back and some technical explanations are necessary.
To represent a market value, poppy gum must be refined, then distributed on a solvent market. Culture therefore only develops once it is backed up by local laboratories and international networks.. Unlike the refining of cocaine, that of heroin requires significant logistics, therefore a centralized organization far from the farmers. Such a production structure cannot exist without the knowledge of political power.
So, speculative poppy cultivation emerged on the fringes of civil war following a political decision. The boss of the French secret service, Alexandre de Marenches, boasted of having imagined financing the Mujahedin's struggle against the Soviets by producing drugs and advising his US counterpart. Anyway, the culture has developed over the years 80 North, along the Afghan-Pakistani border and often refining in Pakistan itself, under the control of the ISI (military secret service). Putting the Soviets through what they had endured in Vietnam, the Americans sent the heroin back to Afhanistan to be consumed by Soviet soldiers and to demoralize their army.
Far from ending the withdrawal of Soviet troops, the civil war became in the years 90 a war of all against all. Warlords, regrouping ethnic armed groups, fought each other through ephemeral alliances, each of them funding their own troops by organizing poppy cultivation in the area of ​​territory they controlled; the Pakistani ISI retaining authority above the fray thanks to the refining monopoly. The Americans, who continued to monitor the distribution, ensured that a large part of it flowed into Iran to undermine the Islamic revolutionary society.
In 1992, Washington tried to end the Afghan civil war, he had provoked, by drying up its funding, So by closing Pakistani refineries. The White House dispatched large DEA teams (Drug Enforcement Administration) in Islamabad, But it was too late. General Asif Nawaz's efforts proved unsuccessful: the Pakistani economy itself had become dependent on drugs.
In the run-up to the attack on Afghanistan by the United States, most of the Afghan territory was ruled by the Taliban brotherhood, supported at arm's length by the ISI. The sect had unilaterally formed an emirate and was financed exclusively by the cultivation of poppies. The Taliban and their host, Oussama Ben Laden, devised a casuistry according to which Islam would prohibit Muslims from consuming drugs, but not to produce it for the infidels. They negotiated at the UN with Pino Arlacchi and with the United States and agreed to destroy crops for substantial compensation., lucky that, depending on the period, they lived on opium or subsidies.
North of the country, Commander Massoud and his Islamic Front[3] act identically.
Crop destruction deals between the Taliban and the UN caused serious economic crisis for the Pakistani ISI refining system. Dissension quickly reached its breaking point, causing Pakistan to turn against the Taliban, as the United States also came into conflict with the Brotherhood, but about the construction of a pipeline as far as they are concerned.

It is now a cliché in the Western press to claim that Osama bin Laden, Public Enemy No. 1 of the United States, is still alive and hiding in the tribal areas of the Afghan-Pakistani border. It does not matter whether this imputation is correct or not., we will simply observe that if this were the case, the US military should have intervened a long time ago to dislodge him, take him prisoner and bring him to justice. Yet it is not, while official reports assure that this tribal area is home to refining centers. Ultimately, we therefore suggest that bin Laden has peaceful days, reconverted into drug lord in Waziristan. Anyway, with or without bin Laden, Pakistan's ISI retains monopoly on refining and profits fuel the coffers of General Perez Mouscharraf's government.
Fact, Pakistan's economy is extremely weak. Exports are limited to textile fibers and eggs. Yet the state is very rich, to the point of being able to buy fighter-bombers in the United States and warships. Far from demanding explanations from General Mouscharraf, during his last trip to the region, Secretary of State Condoleezza Rice congratulated herself on selling state-of-the-art F-16s to Islamabad, which has no other way to pay for them than to mine Afghan opium. Everyone turns a blind eye to a system in which they participate, where participated, especially as Iran has become the new target, that the Pakistani army will be essential to strike Tehran and that the operations will be expensive. It is worth recalling that President Bush's special envoy, James Dobbins, whose assessment of the situation we mentioned at the beginning of the article, is precisely the president of the Rand Corporation, the lobby of the US military-industrial complex.

[1] On the general situation, see "Afghanistan 2004 », Voltaire, 20 January 2004.
[2] « Afghanistan’s Drug Boom », by Michèle Alliot-Marie, Washington Post, 6 October 2004. We also dealt with this text in the International Free Tribunes of 7 October 2004.
[3] For the purposes of global communication, Islamic Front to be hastily renamed Northern Alliance before Washington overthrows the Taliban.

The ultimate weapon of mass destruction: “Own the weather” for military use?

Stacy died a week after receiving her first shots