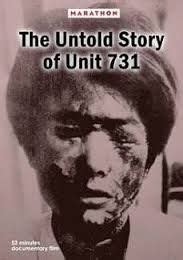 To view the doc:

“Biological experiments were carried out on humans during WWII.

Why the western powers, aware of these atrocities, did they try to hide the facts?

End of the war, scientists, the top secret US biological warfare lab, hurriedly travel to Japan to interview these subject matter experts.

It seems like, when faced with the opportunity to obtain enticing scientific data, practically none of the members of this mission will have ethical problems.

At a time when the Nuremberg trials are brewing, the Americans are ready to cover it up ...

The American and Japanese governments initially tried to deny the existence of these atrocities, and this despite the production of official information to the public.

A document continued: "In order to protect the interests of ISUnited States and avoid any embarrassing situation, keeping the most absolute secret is essential. »

The interest shown by the Allies in its work meant in fact the lifting of the taboo on human experimentation, yet stipulated by the Geneva convention voted in 1925.

That their soldiers were the victims of such ignominy actually seems to have fascinated more, in the name of science, Western governments than having revolted them… ”

Some sources in English:

How far will these world order gurus go to take up all the devilish drifts of science? …

“The project MK-ULTRA was the inspiration behind the Manchurian candidate.” (Page introuvable)

Rabbis in prison for organ trafficking…