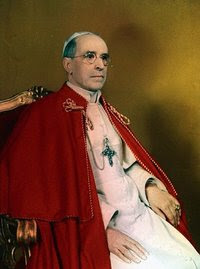 Pope Pius XII
To the holiest of Jewish holidays, Yom Kippur, in autumn 1931, Guy de Rothschild walked through the massive door to the 19, rue Laffitte, for the first time as an adult for adult affairs. The day was chosen with care, what others might perceive as the start of a banking career for a Rothschild, he entered a priesthood. At twenty-two, Guy was assigned to write letters. One of his correspondents was Cardinal Pacelli, futur Pape Pie XII, then in charge of the finances of the Holy Office, and who kept a small account at MM. Rothschild brothers.
In the book, Hitler's pope, John Cornwall tells the story of Eugenio Pacelli, and Pope Pius XII. Pacellli was arguably the most dangerous clergyman in modern history. As Pontiff during World War II, not only did he not denounce Hitler's ’’ final solution ’’ but personally, made the final solution possible!

In the first decade of the twentieth century, Pacelli was a brilliant Vatican lawyer, who helped shape a new ideology of unprecedented pontifical power. As a nuncio (nuncio) apostolic in Munich and Berlin in the years 1920, he used cunning and moral blackmail to

impose the power of Rome on Germany. In 1933, he negotiated a treaty with Hitler, the Reich Concordat, which ensured that the Nazis would unanimously join the most powerful Catholic community in the world, to seal, by Hitler's own admission, the fate of the Jews in Europe.

Eugenio Pacelli was described systematically, during his pontificate, and after his death, as being a member of the Black Nobility. The Black Nobility was a small group of aristocratic families from Rome, which was held by the popes after the seizure of their possessions in the bitter struggle for the creation of the nation-state of Italy. His father and grandfather before him, owed their distinction to the membership of the Vatican lawyer caste, in the service of the papacy.

The immediate association of the Pacelli family with the Holy See dates from 1819, when his grandfather, Marcantonio Pacelli, arrived in the Eternal City to study canon law, or Church law, as ‘’ protoge '' of an uncle of the clergy, Monsignor Prospero Caterini. In 1834, Marcantonio had become a lawyer in the Tribunal de la Rota, a tribuneal clergyman involved in activities such as cancellations of marriage. While raising her ten children (her second child deviendra Eugeni's fatherThe, Filippo, born in 1837), Marcantonio became a key agent in the service of Pius IX, popularly known as Pio Nono.
The lively temper, charismatic, and epileptic Pio Nono (Giovanni Maria Mastai-Ferretti), crowned in 1846, was convinced, as it had been for its predecessors from time immemorial, that the papal territories forming the belly of the Italian peninsula, ensured the independence of the successors of Saint Peter. If the Sovereign Pontiff was a
simple resident of a foreign country, how could he claim to be free from local influences? Three years after his coronation, it seemed that Pio Nono had shamefully lost his sovereignty over the Eternal City to a Republican mob. The 15 November 1849, the comte Pellegrino Rossi (a lay minister) of the government of the Papal States, famous for his sarcasm, approached the Chancellery Palazzo della in Rome and greeted, with a contemptuous smile, a brooding crowd waiting. As he was about to enter the building, a man jumped up and stabbed him fatally in the back of the neck. The next day, the pope's summer palace in Quirinal, which dominated the city in height was sacked, and Pius IX, disguised with a simple priest's cassock and a pair of large glasses, fled to the seaside, at Gaeta fortress, in the safety of the neighboring kingdom of Naples. He took with him Marcantonio Pacelli as his legal and political adviser. From this solidarity, Pio Nono launched denunciations against the scandalous betrayal of democracy and threatened with excommunication against potential voters. Only with the help of bayonnettes françaises, and one
Rothschild loan, Pio Nono contrived to return to the Vatican a year later to resume a despised rule over thethe city of Rome and what remained of the papal territories.
From this point of view, we see from the Vatican that it owes its existence to Rothschild.

The CIA, Operation Gladio, the Nazis and MK-Ultra …

Retreats: Stuffing of ballot boxes in the Senate by the UMP? 22 October 2010