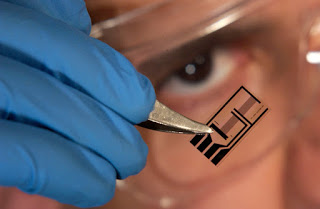 By Annie HAUTEFEUILLE (AFP) – 21 feb. 2010
Miniaturized implants or chips “spies”: the freaky nanos
PARIS - Miniaturized brain implants, invisible communicating chips hidden under the skin : real or still fictional, technologies likely to threaten freedoms or even man himself raise fears and ethical questions.
Can we increase human performance, or even risk eliminating the border between human and non-human?
Posed, but little discussed, during the public debate on nanotechnologies launched in October and closed next Tuesday, the issue was also addressed during hearings preparing for the revision of bioethics laws in France.
Designated by the expression “convergence NBIC”, the association of nanotechnologies with computer science, cognitive science and biotechnology makes some fear the worst.
“Does this convergence inaugurate the hybridization of the living and the integer, of the mind and the machine?”, asks the Grenoble association “Parts and labor” (PMO).
Another consequence of this convergence, radio frequency chips (RFID), made invisible by dint of being miniaturized could be implanted in the human body facilitating a “increased surveillance”, according to Gwendal Le Grand, of the National Commission for Informatics and Freedoms (CNIL).
For PMO activists, the CEA Clinatec research center project in Grenoble aiming to “put nanos in our heads” brings us closer “irreparably cyborgs and other bionic men”, they replied by email to AFP.
Opposed to the public debate on nanotechnologies they sought to prevent in several cities, they think they see “propagandists of + the augmented man +, + transhumanists + at the helm of American or European scientific institutions”.
While considering that “wanting too much to regulate, we risk killing innovation”, Francois Berger, Director of the Nanomedicine and Brain Laboratory at the Grenoble Institute of Neuroscience, summarized the ethical questions, the 22 September in front of parliamentarians.
“What to think of altered humanity, namely the machine in the human? How far should we go in the area of ​​ameliorative medicine?”.
Electrodes implanted in the brain already allow, via la neurostimulation, to treat Parkinson's disease, obsessive-compulsive disorders or even depressions resistant to other care.
“Ethically, the unsupervised use of neurostimulation in psychiatry could represent a risk of major drifts as was the case for lobotomy”, warned Professor Berger in front of the deputies.
The risk of “mind manipulation”, via brain implants, was recently highlighted by researchers from the CNRS and the National Institute for Research in Computer Science and Automation (INRIA) in ethics reports.
Intended to eliminate the risk of hematomas in the brain when electrodes are implanted, future treatments could cause other dangers.
“We are now able to inject multifunctional nanoparticles into the blood so that they reach the brain. Tomorrow, we can stimulate them from the outside”, said Prof. Berger.
“On an ethical level”, the prospects offered by miniaturization could be “questionable”, he recognizes, even if the “synthetic brain” rest of the realm of science fiction.
Intervening in the debate on nanotechnologies, a “French transhumanist association” for his part defends the idea of ​​improving mankind in the face of “phobias” in front of “what can be experienced as an outrage against Nature”.

Source: of the AFP, Text: HERE

RFID – Roland-Garros and IBM : the show of man-machines…

An RFID chip to monitor kindergartens