Skip to Content
Home / False Flag Op. Psycho Manipulation / The holy crusade of the United States against the Muslim world… 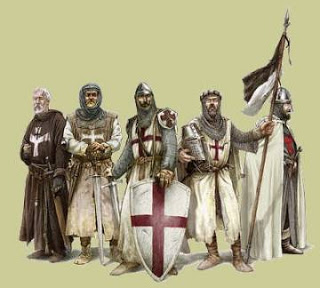 Mondialisation.ca, The 11 September 2010
The evolution of US military doctrine has initiated a critical transition. The "global war on terrorism" (GMAT) launched against Al-Qaeda in the aftermath of September 11 turns into a veritable "war of religion", in "holy crusade" against the Muslim world.
The dogma of the US military and the war propaganda during the Bush administration was based on the fight against Islamic fundamentalism, not against Muslims. "This is not a war between the West and Islam, more […] a war on terror. "We must distinguish the so-called" good Muslims "from" bad Muslims ":
The 11 September 2001, the dust of the collapsed twin towers barely settled, we feverishly searched for "moderate Muslims", people who can give us answers, who would distance themselves from this outrage and condemn these violent acts of "Muslim extremists", of "Islamic fundamentalists" and "Islamists". Two distinct categories of Muslims quickly emerged: the "good" and the "bad", either the "moderates", "Liberals" and "secularists" ¸ as opposed to "fundamentalists", to "extremists" and "Islamists".(Tariq Ramadan, Good Muslim, bad Muslim, New Statesman, 12 February 2010)
In the aftermath of September 11, in most western countries, the Muslim community was clearly on the defensive. The division between "good" and "bad" Muslims was widely accepted. The attacks of 11 September, allegedly perpetrated by Muslims, was not only condemned, but Muslim communities also supported the invasion of the United States and NATO and the occupation of Afghanistan, seen as a legitimate campaign against Islamic fundamentalism.
Washington’s goal was to instill a sense of guilt in the Muslim community. The latter rarely admitted that the attacks were not instigated by Muslims. Al-Qaeda's continuing relationship with the CIA, its role as an "active intelligence element" since the Soviet-Afghan war is not mentioned. (Michel Chossudovsky, America’s “War on Terrorism”  Global Research, Montreal, 2005)
Since the beginning of the years 1980, Washington has covertly supported the most conservative and fundamentalist factions in Islam, especially in order to weaken secular movements, nationalists and progressives in the Middle East and Central Asia. Known and documented, Saudi Arabia’s Wahhabi and Salafi fundamentalist missions dispatched not only to Afghanistan, but also in the Balkans and in the Muslim republics of the former Soviet Union, were clandestinely supported by US intelligence. (Ibid.) What is called "political Islam" is largely a creation of this US intelligence apparatus (with the support of British MI6 and Israeli Mossad).
Ground Zero Mosque
Recent developments suggest a breaking point, a transition from "war on terrorism" to the categorical demonization of Muslims. While emphasizing freedom of religion, the Obama administration "calls" for a wider war on Islam:
As a citizen and president, I believe Muslims have the right to practice their religion like anyone else in this country […] We are in the United States and our commitment to religious freedom must be unquestionable. (Cited inObama Backs Ground Zero Mosque; Iranian Link Questioned, Israel National News, 15 August 2010)

Behind the political smokescreen, the distinction between "good" and "bad Muslims" is abandoned. The proposal for a mosque at Ground Zero is allegedly funded by "the Iranian state, radical and thug […] as the United States tightens sanctions against the regime in response to its support for terrorism and what is suspected to be a program to build nuclear weapons " ( Ground Zero mosque developers refuse to outright reject funding from Iranian president Mahmoud Ahmadinejad – NYPOST.com, August 19, 2010) 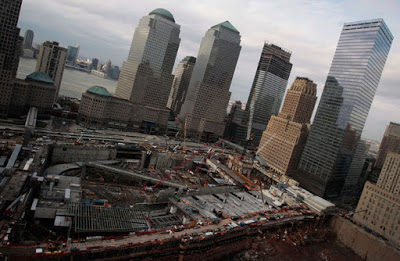 The wave of xenophobia unleashed by the planned mosque and community center at Ground Zero looks like a PSYOP (psychological operation), contributing to foment hatred towards Muslims in the Western world.

The goal is to instill fear, to provoke and harness the unyielding support of the citizens for the next stage of America's "long war", which consists of launching "humanitarian" airstrikes against the Islamic Republic of Iran, represented in the media as a pimp of terrorism.
Although "not all Muslims are terrorists", the media report that all terrorist attacks (planned or carried out) are perpetrated by Muslims.
In the USA, the entire Muslim community is targeted. Islam is described as a "religion of war". It is trumpeted that the mosque and community center project is a "violation of the sanctity of Ground Zero".
[…] building a mosque at Ground Zero is offensive and disrespectful to the city and the people who died in the attacks. This project "spits in the face of all those who were murdered on 11 September. (Plan to build mosque at Ground Zero angers New Yorkers ,National Post, 17 May 2010)
"Terrorism of domestic origin"
Arrests of so-called "domestic Islamic terrorists" based on fabricated charges, as well as their trial shows, occupy an important function. In the unconscious of Americans, they harbor the illusion that "Islamic terrorists" are not only a real threat, but also that the Muslim community to which they belong is largely favorable to their actions.
[D]more and more, the threat is not from foreigners speaking broken English and holding questionable passports, she is closer to the house. She resides in urban row houses, in dark basements, wherever there is internet access. Domestic terrorism is the latest incarnation of the Al Qaeda threat. (How terror came home to roost, Ottawa Citizen, 27 August 2010, article on alleged terrorist attack in Canada)
Right now, a widespread mechanism of demonization of an entire population group takes place through a process selectively targeting Muslims with radical tendencies (or supposedly associated with "terrorist organizations").
Muslims increasingly face routine discrimination and racial profiling. They are considered a potential threat to national security. The threat is said to be "much closer to home", "In your neighborhood". In other words, what takes place is an unqualified witch hunt reminiscent of the Spanish Inquisition.
Otherwise, Al-Qaeda is described as a powerful multinational terrorist organization (possessing weapons of mass destruction), with subsidiaries (secretly supported by the intelligence services of the United States and its allies) in many Muslim countries. Al-Qaeda is found (with equivalent acronyms) in various geopolitical hotspots and in theaters of war.
Al-Qaeda in Iraq (AQI), Al-Qaeda in the Arabian Peninsula (AQPA) (composed of Al Qaeda in Saudi Arabia and Islamic Jihad in Yemen) Al-Qaeda in Southeast Asia (Jamaah Islamiyah), the Al-Qaeda organization in the Islamic Maghreb, Al-Shabbaab en Somalie, Egyptian Islamic Jihad, etc.
Atrocities committed against millions of Muslims in Iraq and Afghanistan are never considered terrorist acts by the occupying forces.
The US Inquisition
A "war of religion" unfolds to justify a world military crusade. In the unconscious of many Americans, the "holy crusade" against Muslims is justified. The president may maintain freedom of religion, the inquisitorial social order of the United States has institutionalized discriminatory tendencies, harmful and xenophobic towards Muslims. Racial profiling applies to travel, to the job market, access to education, social services and more generally social mobility and status.
As an ideological concept, the United States Inquisition is similar in many ways to the social inquisitorial order that reigned in France and Spain during the Middle Ages. L’Inquisition, who started in France in the 12th, was used to justify conquests and military interventions. (See Michel Chossudovsky, The 11 September and the "American Inquisition", Mondialisation.ca, 11 September 2008).
Arrests, the trials and sentences of the alleged "terrorists of internal origin" (of the Muslim community in the United States) following fabricated charges perpetuate the legitimacy of the State Homeland Security and its legal and law enforcement inquisitorial apparatus.
An inquisitorial doctrine upsets realities. This is a social order based on lies and fabrications. But since these lies emanate from the highest political authority and are part of a widely accepted "consensus", they invariably remain unchallenged. Those who challenge the inquisitorial order or in any way oppose the United States military or its national security agenda are labeled as "conspiracy theorists" or outright terrorists.
Besides the process of arrests and inquisitorial prosecutions that surpasses the Spanish Inquisition, a timely out-of-court murder program approved by the White House has been set in motion. This allows US special forces to kill US citizens and those suspected of being terrorists of domestic origin. (Look Chuck Norris, Obama’s US Assassination Program? “A Shortlist of U.S. Citizens specifically Targeted for Killing”?, Global Research, 26 August 2010)
The goal is to foster the illusion that "the United States is under attack" and that Muslims across the country are complicit in and endorse "Islamic terrorism".
Demonization of Muslims Preserves Global Military Agenda. Under the United States Inquisition, Washington has a self-proclaimed sacred mandate to wipe out Islam and "spread democracy" around the world.
We face a total and blind acceptance of power structures and political authority. America's holy crusade against the Muslim world is a true criminal act against millions of people. This is a war of economic conquest.

More than 60% of the world's oil and natural gas reserves are on Muslim lands. The US Military Alliance's "Battle for Oil", NATO and Israel demand the demonization of the inhabitants of those countries with these vast reserves of oil and gas. (See Michel Chossudovsky, The “demonization” of Muslims and the battle for oil, Mondialisation.ca, 7 January 2007)

Michel Chossudovsky is Director of the Center for Research on Globalization and Emeritus Professor of Economics at the University of Ottawa. He is the author of War and globalization, The truth behind the 11 September and some Globalization of poverty and the new world order (international bestseller published in 12 languages). 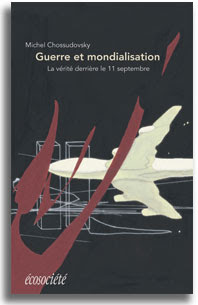 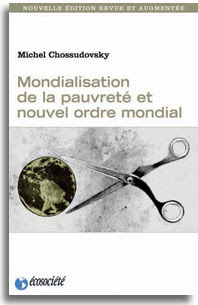