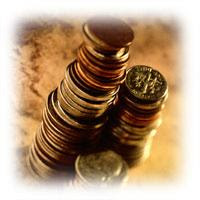 Leo Lewis, Asia Business correspondent
With a recovery (economic) out of reach, a population growing in old age and perhaps a decade of deflation in prospect, JAPAN COULD START THOUGHT ABOUT THE MOST RADICAL MONETARY POLICY OF ALL – THE ABOLITION OF MONEY CASH.

Unorthodox, never tried and, Bank of Tokyo Mitsubishi strategist said, "In the realms of economic science fiction", THIS RECOMMENDATION HAS HOWEVER BEGUN TO FLOAT INTOKYO'S CORRIDORS OF POWER AND ECONOMISTS HAVE DESCRIBED JAPAN AS PARTICULARLY SUITABLE AS A TEST GROUND.

The search for more unusual economic policies continues, despite the recent surge in the Nikkei index 225. Market may reflect boom in Chinese investment, rising consumer confidence and other encouraging data, but economists see few beacons of long-term hope for Japan.

OTHER EXTREME IDEAS CONSIDERED BY FINANCIAL AUTHORITIES INCLUDE A TAX ON PHYSICAL CURRENCY OR INTRODUCING ONE THAT WORKS NEXT TO THE YEN.

All three ideas are based on a theory about interest rates and the concept that a nominal rate of zero - which Japan has lived with for most of the past decade - might be too high.. In the case of Japan, theory suggests that nominal rates of -4% could be closer to what is needed to save the economy from another deflationary spiral. AGREEING THAT THIS MAY BE NECESSARY, THE NEXT QUESTION IS HOW THIS COULD BE IMPOSED ON THEM.

Several members of the ruling Liberal Democratic Party believe that the abolition of cash, although politically radioactive, could be technically feasible. Richard Jerram, economist at Macquarie Bank, told investors that “THE PROPOSAL HAS BECOME PRACTICAL THANKS TO THE BROAD PENETRATION OF ELECTRONIC CURRENCY AND CREDIT CARDS IN JAPAN”.

He said all of these proposals were radical, but deserved to be considered for Japan. NO PHYSICAL LIQUID MONEY, A CENTRAL BANK MAY SET RATES EXACTLY WHERE IT WANTS, SAYS THE ARGUMENT. M. Jerram said: "At the heart of the problem of acquiring negative nominal interest rates lies the idea that physical currency is an anonymous bearer bill and has a nominal interest rate of zero.". While a central bank can impose positive or negative rates on goods that are not material, transmitting these rates in physical currency is a huge challenge. By permanently eliminating cash from a system, he added, policymakers are deprived of the excuse that zero is (the number) the lowest nominal rates can reach as a tool against deflation.

AND THEORY, MANY JAPANESE COULD EASILY JUMP INTO A WORLD WITHOUT CASH. THE COUNTRY HAS SIX COMPETING PAYMENT SYSTEMS WITHOUT CASH, AND MANY OF THEM ARE INTEGRATED IN MOBILE PHONES. BY INCLUDING OYSTER-CARDS ISSUED BY PUBLIC TRANSPORT COMPANIES, SOURCES IN THE INDUSTRY BELIEVE THAT THERE ARE APPROXIMATELY 120 MILLION CASH-FREE PAYMENT CHIPS THAT ARE IN WALLETS AND HANDBAGS IN JAPAN, AND WHICH WAIT TO BE ACTIVATED.

However, the country remains a consumer society wholeheartedly based on cash. The currency in circulation represents approximately 16% of its GDP, compared with levels of 2 at 3% in most developed countries. Reduce these 16 percent to zero would be a tear, but would bring considerable benefits, said M. Jerram.

More, just as Japan's cultural attachment to cash might prove difficult to dislodge, some economists believe the same could be true of deflation. The growing elderly population in the country mainly holds money in cash or cash equivalents and, compared to its American and European counterparts, the Bank of Japan has been under virtually no political pressure to be more aggressive in its war on deflation. It's quite unlikely, added M. Jerram, to tolerate something as drastic as the elimination of cash.

A chip implanted in the body to detect the H1N1 virus : Verichip shares jump

Soon RFID chips under the skin of English delinquents ?