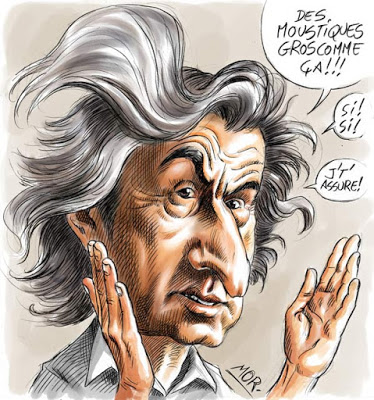 In France, hypocrisy is really at its height.

A majority of French support the air strikes in Libya and France's role in military operations, not forgetting the political approach to the problem. A wicked dictator to bring down, It's always good to take.

Nicolas Sarkozy seized the opportunity to restore his political health by listening to a philosopher of the art of war, become in recent weeks, the informal diplomatic adviser to the French government. I mean the inevitable Bernard-Henri Lévy.

So, the left and the right are united in what can be called military and political support for a coup.

I don't carry Colonel Gaddafi in my heart, I wrote an article listing the reasons for supporting part of his people not so unhappy of the Libyan leader, let's say it.

Prosperity, it helps to digest many snakes…

More, there is a Libyan toad even more difficult for the French people to digest, specially for him.

We do not know why, but BHL will encore a impair, it has become a habit with him! He met the leaders of the Libyan insurgency on several occasions and saw them as heroes, genuine fighters for freedom and democracy!  We will see that if there are heroes within this insurrection, they are not the ones who run it.

On this video we see Mustafa Abdel Jalil with BHL. (from 40″) who told an American journalist: i speak with my heart, I speak with my conscience…Everything is fine!

In bulgaria, the face of Mustafa Abdel Jalil is familiar to some people who consider Nicolas Sarkozy as a great benefactor. We understand them since they owe him, it seems, their freedom regained. Except that, Few years later, the benefactor is very versatile…

Mustafa Abdel Jalil, received several times by the French president is the former justice minister of Gaddafi but before that, he was the judge of the Libyan Supreme Court who sentenced to death twice, Bulgarian nurses and Palestinian doctor, all accused of having introduced the AIDS virus into Libya. You know the famous Bulgarian nurses whom Sarkozy had obtained the release in funny conditions well qu'obscures.

You could say that a single doubtful man should not cast doubt on the entire National Transitional Council (CNT) who is leading the insurgency. Unfortunately,  there are two others equally involved in the case of the Bulgarian nurses.

Abdel Fattah Younès, general of the rebellion, is a former interior minister of Gaddafi who personally supervised, the extortion of confessions from Bulgarian nurses, by torture…

Two LIBYANS from SARKOZY – BHL are criminals by inet
On DM

Which means without ambiguity that BHL has taken to the skies as great defenders of the Libyan people and democracy., men co-responsible for an unspeakable denial of justice, arbitrary imprisonment and torture. Men who were among the pillars of the Libyan dictatorship, accomplices in serious human rights abuses.

Which means unambiguously that Sarkozy received these men with great pomp by presenting them to French public opinion as democrats and progressives while knowing the truth about their past crimes.. He engaged the French army in a military operation in support of such men who would be accompanied by al-Qaeda mercenaries made free to sell to the highest bidders since bin Laden was eliminated..

Here is Abdel Fattah Younès (lattice), the torturer of the Bulgarian nurses, in the company of BHL. 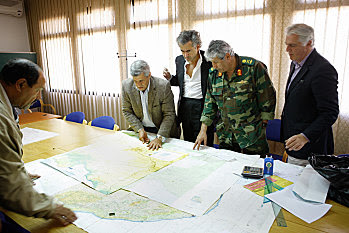 A third character of the CNT was recognized by the nurses.

The military coordinator of the Benghazi insurgents played, him too, an important role in mobilizing Libyan public opinion against nurses and pushing parents of children with AIDS to take action.

Of course, Bulgarian nurses and government find it hard to understand the French attitude.

Source: miltondassier.over-blog.com/ HERE
Other info:
– The fall of Tripoli : M. Abdeljalil confesses the lie filmed in Qatar and broadcast around the world
Click here to download the article in PDF format

Non, the crisis is not a natural disaster