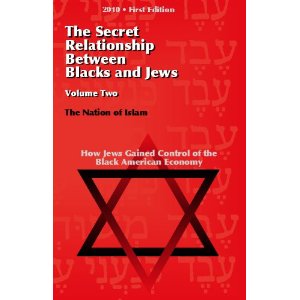 Control of the African-American economy ( Tome 2)

An account with this video has been censored, postponed today 09/03/2016

(Note: Louis Farrakhan did not write these books (volume1 and 2) but only made them edit. He is a preacher from La “Nation of Islam” who strived to unify the entire African American population. What purpose? This question is discussed in the article: The Nation of Islam (WE) of the African American community and the Freemasons. (Update of this note on 11 avril 2016)

This extract (format pdf) gives an idea of ​​the contents of the tome 2 published in June 2010. It contains a rather impressive list of Jewish bankers established in the southern United States before or after the Civil War..

(Please note that these ‘Jews’ do not follow the path of Torah, monotheist but follow oral writings, occult)

Among them the Lehmann brothers, immigrants from Germany, settled in Montgomery (Alabama) under the name of Lehman Brothers (bankers, slave owners, cotton traders) ; their bank went bankrupt in september 2008.

Other famous bankers : Joseph Seligman de Greensboro (Alabama), who began his career as a traveling merchant ; Daniel Warburg from New Orleans ; the Schiff brothers, also from New Orleans, later as head of Kuhn, Loeb & Co., one of the founding banks of the Fed, the US Federal Reserve.

Jewish Banking and Commercial Infrastructure in the Southern States
in the age of slavery and racial segregation :

In regions where cotton is grown, Jewish merchants and financiers occupy a prominent place. They are the main source of credit for slave owners,
planters and sharecroppers. It is through this Jewish financial network that investments from the North of the United States or Europe are made.
To this network must be added the thousands of Jewish street vendors who also practice lending money on a smaller scale..

The main chapters of the book :

All About the Benjamins : the former slave meets the Jewish merchant (allusion to the film 2002 – french title : The Bounty Hunters – the “Benjamins” in question are the banknotes of 100 dollars bearing the portrait of Benjamin Franklin – It’s All About the Benjamins is also a title of Puff Daddy from 1997). The money, so, and more money… or how the Jewish merchants and businessmen enriched at the expense of the black ghettos became the managers and advisers of the big African-American stars of today : actors and rappers, but also the Tiger Woods, the Oprah Winfrey and others “black entertainers” (without forgetting Michael Jackson).

During the Civil War, he becomes Minister of Justice, then Minister of War and Minister of Foreign Affairs of the Southern Confederation.

Thanks to his good relations with the Jewish bankers of the City of London, the South never runs out of money. *

After the war, incorrigible racist, he is one of the founders and funder of the Ku Klux Klan. (The very existence of Benjamin is enough to demolish the legend that the KKK attacked both Jews and blacks. In fact, the Klan was never the enemy of racist Jews – neither are the fascists of today the enemies of Israel). To complete the picture, Benjamin is actively involved in the assassination of President Abraham Lincoln. He fled to England and became a member of Queen Victoria's Royal Council. He died in Paris, where he had family ; his grave is in the Père-Lachaise cemetery.

* To thank Judah Benjamin, les CSA (Confederated States of America) put his portrait on the two dollar bills, so that Southerners also have their “Benjamins”.

In July 2010, Zionists pressure Barack Obama to condemn The Secret Relationship like book “anti-semite” – details. As a docile puppet manipulated by his Jewish advisers, the president should obey… and forget that he participated, in 1995, with a million black Americans, at the great march organized in Washington by Louis Farrakhan, the person responsible for the publication of the book.

Source: wotraceafg.voila.net/ (The page is no longer in service)

Added some more searches and images.

Washington spies on and bullies thousands of Americans…

Dream pretext to cut the internet without cutting Wikileaks of course !!