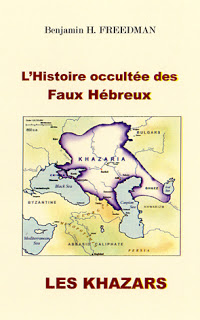 THE MODERN JEWS
DO NOT DESCEND FROM ISRAEL !

Facts are Facts, the Truth about the Khazars

THE OBVIOUS HISTORY OF THE FALSE HEBREWS Preface Benjamin H. Freedman Benjamin Freedman was brought up as a "non-practicing Jew." He lived in New York, and became a very efficient businessman, and very rich. At a certain period of his life,  he was the main shareholder of the huge Woodbury Soap Company. He witnessed, and even a little actor, manipulations that allowed the Talmudists to dominate US politics and media. In his various functions in the service of Zionist interests,  he had the opportunity to have a large number of personal and in-depth interviews with seven presidents of the United States. At the end of World War II, he was sickened by what he had witnessed, and he therefore became a "defector of Zionism". He decided to reveal all he could. He broke with Judaism,  and converted to Catholicism. In 1946, he founded the League for Peace and Justice in Palestine ; then spent the rest of his life,  and much of his considerable fortune,  to fight against the Zionist tyranny which encircled the United States. He devoted more than 2 million and a half dollars, taken from his personal portfolio. Ironically, this defector was just one of the people who must have had the most to talk about. ; Benjamin Freedman had been at the highest level of the Jewish organization. He has known personally :  Bernard Baruch,   Samuel Untermyer,   Woodrow Wilson,   Franklin Roosevelt,   Joseph Kennedy,  and John F. Kennedy. As we said,  Mr. Freedman was very rich,  and had an exceptional address book,  these are probably the reasons that kept him alive. Le magazine Commentary,   published by the American Israelite Committee,   calls him regularly : "The anti-Semitic Jew". Arnold Forster,  a senior official of the B’nai B’rith Anti-Defamation League (A.D.L. : a kind of private CIA, working on behalf of Israel, and who watches the actions of the American patriots), defined Benjamin Freedman as a "wealthy Jewish apostate,  driven by self-hatred ” ;  because when a non-Talmudist Jew has a criticism of the Talmudist Jews, he is inevitably driven by self-hatred… There's no, there can be no other possible explanation !But Benjamin Freedman will show us that everything relies on a correct definition of the word "Jew".
To know more
Download PDF: