Skip to Content
Home / Dualities & New World Disorder / Movement of Zionist Jews behind the Armenian Genocide
Translations of parts by Dailycensorship
Zionist Jews behind the Armenian Genocide, by Jack Manuelian
The plans for the Armenian genocide 1915 at 1923, where a million and a half d’ Armenians perished in a barbaric manner sure their ancestral lands in modern Turkey, were developed and wereit's mis in place in the years 1910 or 1912. 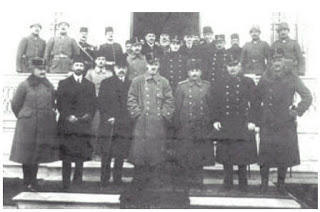 Ands the book “the internal affairs of the Ottoman revolution” (Inner Folds of the Ottoman Revolution), written by Mevlan Zadeh Rifat in Turkey and which was published in 1929, l'author, a Turkish pro-sultan, asserts that the “Armenian genocide was decided in August 1910 and in October 1911, by a Young Turks Committee entirely composed of ”Jews” from the Balkans. They are came as a syncretist Judeo-Muslim sect which included Talaat, Enver, Behaeddin Shakir, Jemal, and Nizam posing as a Muslim. He had one mete in a hotel Salonika (Salonique) from the lodge, du great Orient, funded by Rothschild. Syncretism means a combination of different forms of beliefs or practices; la freemasonry matches this description.

As the masons began the revolution in 1897 in France with the cry “freedom, fraternity, equality,” lit is Jeunes Turthans have used the same slogan in their revolution of 1908. A conference paper by 1994 by Joseph Brewda of the Schiller Institute titled “Palmerson launches the Young Turthans to permanently control the Middle East”, claiming that the founder of the Young Turthans was a certain Jew named Emmanuel Carasso. He declares: “Carasso created the secret society the Jeunes Turques in the years 1890 in Salonika, At that time a part of the Turkey, and now she is part of Greece. Carasso was also the grand master of an Italian Masonic lodge there, called Macedonia Resurrected. The lodge was the headquarters of these Young Turthans, and all the best senior leaders of young Turthans were members.”
In addition, M. Brewda a dit:… “During the diets Young Turks, Carasso continued to play a leading role, he met the sultan, to tell him he was knocked down , he was responsible for putting the sultan under house arrest , he led the Young Turks' intelligence interconnection in the Balkans. And he was in charge of all the food supply in the empire during WWI.” It is ironic that four centuries after the Turkish sultans welcomed European Jews expelled to Turkey, some of the Jews belonging to secret societies and Zionism, drove the sultan from power at the beginning of the 20th century, to destroy the Ottoman Empire. Et they celebrated their victory by massacring by proxy almost the entire Christian Armenian people, a million and a half Armenians; half a million Greeks;  and a half million de Chkeep Assyrians and Aramaeans.
In 1982, after the Israeli army conquered Lebanon, they celebrated their victory by vicariously slaughtering children and women in the Palestinian camp of Chatila, in Liban, by allowing militias of Lebanese Phalangist fighters to move around the camp for two days and murder its inhabitants. Four – twenty percent of the inhabitants of the camp were killed. Almost all of the dead were old people, women and children, and each of them were unarmed. Not a weapon, not a knife n’ont been found in their possession, says a Palestinian witness.

All of this, according to the prisceptes of the Talmud, the satanic bible of ”Jews” (JulZionists or crypto-Jews, see note 1), which encourages the Jews to kill, directly or indirectly, as through this saying: “Every Jew who sheds the blood of the ungodly, is doing a sacrifice to God.” (Talmud, Bammidber Raba c 21 & Feet 772: ”Every Jew who sheds goyim's blood returns at make an offering to God.”)

Note 1: The Talmud is the satanic version of the Torah. Jews have an oral version of the Torah called Tenach, or what some call the Talmud, but a minority of true Jews are familiar with the Talmud, which is not the Talmud in use today. The Babylonian Talmud, which has been highlighted since 1905, is blasphemous. In fact, the Jews of today reçHivent teaching through this particular Talmud.
for example, il refers to to Jesus as an idol, and his worshipers as idolaters. The is specified that jesus was of a bestiality and he burns in hell in a pool of sperm. Now, from where these writings proviendraient, of Satan himself?
The books of the Talmud are based on lessons from pharisiens. To understand why Jesus held such contempt for this ancient sect ”d‘elites”, it is advisable to have some knowledge of the Talmudic books. Un set of 63 books written by d‘ancient rabbis. These books contain the legal code which is the basis for the retransmission ofu present day Judaism and Jewish law. In fact, Talmudic Judaism is above all a legal system in a literal sense. He has no connection with religion. It is more from from an old group cult politics withs followers who are not openly Jewish and whoont pformerly called crypto-Jews. In fact, the Talmud comes from the ancient Cabal (Kabbalah) occult and the Pharisee sects. Jesus told them they were those of the Synagogue de satan. All the Zionist foundations of watertoday and what they think are the secret teachings of the Talmud. Today, the majority of Jews in Israel are practitioners of Pharisee law – talmudic law – law which is the enemy of truth, or de god. This is why so many jpeople openly claim to be Jews and atheists at the same time.

The iZionist sraelians (those who promote Israel being their home) are not Semites. These are Khazarians who inhabit the land of Israel illegally and who have misused the term anti-Semitic (suggesting to be Semites) by qualifying as being good Jews. Khazarian Israelis are not descendants of Shem, they are impostors who bylifient of semits and claiming to be religious Jews, but they are neither.

“English word Jewish is the 18th century contraction and 4th century corruption of the Latin word Jews?s found in the Vulgate edition of Saint Jerome and derived from the Greek word Ioudaios.”

”A Jew is someone who possesses the Jewish religion or is of Jewish descent through women.” Again this is a deception. The Jew is based on a geographic location, who is Judea, and not a religion. It was also a Roman province.

Back to young turks. M. Brewda writes: “Another important area is the press. Well in power, the Young Turks run several newspapers, dont “young turks”, and its editor, was none other than the Russian Zionist leader Vladimir Jabotinsky. Jabotinsky had been educated as a young man in Italy.“ Later, he started the Irgun terrorist political party in Israel.
M. Brewda, ignoring the possibility that Talaat could have been an undercover crypto-Jew, written: “Of course, there were also some Turks who helped lead the Young Turk movement. for example, Talaat Pacha. Talaat was the Minister of the Interior and the dictator of the regime during the first world war. He was also a member of the Italian Masonic Lodge of Carasso in Salonika. Un year before the coup d'etat of 1908, Talaat became the grand master of the Scottish Masonic Rite in the Ottoman Empire. If you are looking in the archives at the Scottish Rite headquarters in Washington D.C., you can see that most of the Young Turks leaders were Scottish Rite officials.”
”So as not to reveal any plausible motive that might link the actual planners of the genocide, the regime involved another party [ namely lit is Therethans muslim, Kurds and Azeris], who have been manipulated by layers of influence, providing sufficient coverage for planners. “
Translations parts of Dailycensorship
of Jews, Zionists Behind Armenian Genocide Holocaust
sure http://rense.com/general64/genoc.htm
Ref:
– Talmud pharesiens, a satanic version
– Key people in the movement LYoung Turks were crypto-Jews, and compris Mustafa Kemal Ataturk.
– The Young Turk movement and the bitchxion with the Rothschilds
During the Armenian genocide 16 daughters were crucified alive
Click here to download the article in PDF format

HUH. totalitarian planned by the Nazis, this is the 4th Reich