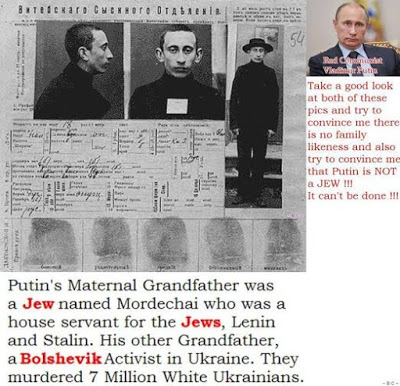 “In Russia, many Jewish people hide their Jewish origin or that they don't know or don't want to know. Putin is a person who hides his Jewish origin, but use it in corruption nets. Dhistorians tried to find his ancestors, but failed. The rordinary people think that Putin is ethnically Russe. If they understoodent that Putin is a Jew, they wouldn't vote for him. The bottom of the image on the right shows Putin's resemblance to a Czarist-era Jew “. (cf: above la photo by Poutine)

Why?
Maybe because some Russians have not forgotten that the communisme was a invention of crypto-juifs * kabbalists.

“Lhe Bolshevik Revolution was launched to carry out the Marxist program which was funded by the Rothschilds and Warburgs d‘Germany (of crypto-Jews) and in partnership with the Warburgs et ship in the USA (of crypto-Jews too). And de Lenin to Putin, we have a linear succession of riders (Kabbalists) Jews under the guise of communism and now, “Democratic capitalism” under Gorbachev, Yeltsin and Putin.”

EllI add:
A boy, “Vova,” from a very poor family in the Soviet Union became a sacred Tsar of Russia (1/6 from Earth's terrain), or rather the new world oil shah and the richest man in the world.
Russia has become a third world country, an appendix of raw materials from the industrialized world.
On the other hand, the housing of the poor are not repaired. There are more slums, and lit is campaigns are depopulated. During 20 last years, the already more people who died than under the invasion of Nazi Germany. Russia loses a million people a year, mainly among the Slavs: Russians, Ukrainians and Belarusians.
Russia surpasses some African countries in terms of corruption – 154th place on 178th.
Press Russe mentioned that Vladimir Putin has secret savings of more than 40 billions of dollars.
People wonder how Comrade Vladimir Putin could do this huge fortune and where is–what, a former communist spy and of KGB maintains its dollars?
In the Kremlin? The eternal question is: “Who lives well in Russia?” AT differentit is periods, they were different people, but now everyone knows life is only good for super rich oligarchs. 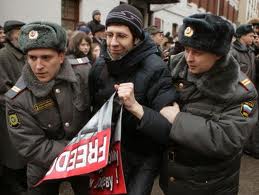 The Support from George Soros for the opposition Russe can be designed to give credibility at Putin.

For those whoi don't knownot George Soros: “Extract from the report broadcast on CANAL +: “How the CIA is preparing for color revolutions“, TheÙ we learn that Georges Soros, the American billionaire financed the colored revolutions in the countries of the former Soviet bloce.“

Georges Soros is for the New World order, it is easy to find references on the internet relativeves to this subject, For example this article: George Soros speaks openly about the coming New World Order as well
Putin's friend, the chief rabbi Russe Berel Lazar, belonging to the Chabad-Lubavitch Hasidic community (linked to many controversies) . In a speech, he tells how the Jews adopted him when he was a child and he was hungry, see vidDamn 1m35.
Other sources of articles ask questions that lend themselves to rreflection on Putin's true intentions, as sure: PUTIN – just another oligarch Jew, where he is affirme what Putin:

“…is just another crypto-Jewish, being conveniently converted to Orthodox Christianity in the years 1960. How convenient. He is no more Christian than Benjamin Netanyahu. He's just another accomplice, manipulatestor, greedy, demonic, billionaire, oligarch who deceives us.”

POUTINE N‘IS THAT A PIISTHIS MAIN ON LE GLOBAL CHIEF BOARD AND IT HAS ALWAYS BEEN.
L‘article PUTIN – just another oligarch Jew adds that Poutine has Jewish origins whether it is on the side of son father or his mother (cf: links put inin the article).
The question we have to ask ourselves. This is why Putin hides his origins? Is it a shame beforeoir origins juivillage?
Especially sincee dyears oldcle it is stipulated that:

“…in the first one ediction du book: Putin: First Person: First Person: An Astonishingly Frank Self-Portrait by Russia’s President, the is note than the maiden name of her mtime was Shalomovich – who is truelably a Jewish name. However, in the second editing, the has been conveniently changedis in Shelomova. Athe cover ??“

*These subversive crypto-Jews = They have no connection with a religion of common sense and even less with a monotheistic religion. They are more from an ancient cult group with followers who are not overtly Jewish and who are sometimes referred to as crypto-Jews.. However, the kabbalists were known in the ancient world under the name of "magi", and they were not Zoroaster's heirs, prophet of the Persian religion of Zoroastrianism. In addition the Zionism is derived from Sabbathism (kabbalistic origin).

Understanding the Cult of the Ancient Chaldean Magi of Babylon, the so-called priests of Zoroastrianism, is essential to understand the development of cults and philosophies of the Hellenistic era, Consequently, the later history of Western occultism, including Freemasonry and ultimately the New Age movement. (Source: Chaldean Magi) 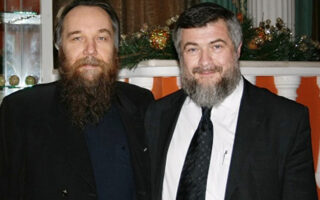 Influence operations for Eurasia abroad involve “trolling” on the Internet? 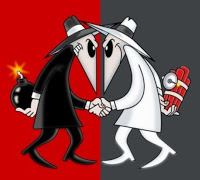 Putin and Russian fighters against Syria ? 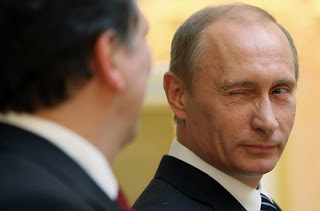 Russia is dominated by global banks too ?