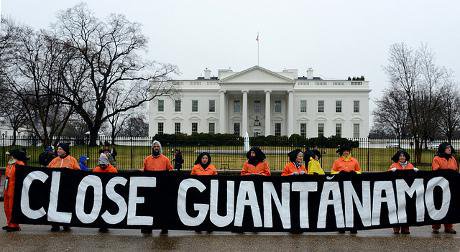 I come back to the facts. [Video has been censored]

‘Recordings discovered, by chance in 2007, to the CIA revealed the interrogation of Ramzi Binalshibh, one of those responsible for the 11 September.

They show, especially, that the terrorist was already suffering from schizophrenia.’

If this man suffered from disorder mental, why he was not declared unfit to stand trial?

‘The testimony of the detainees, by Guantanamo, focuses on “mental torture”, at the camp 7. More, prosecutors don't believe it.‘

“Ramzi bin al-Shibh (…) this, that it is subjected to vibrations and sounds, reminiscent of what he was exposed to by the CIA.

The kind of loud noises they would use to try to break these men down.”

From the start, they intended to torture them? They weren't looking for justice?

“A psychologist, who examined one of the defendants on trial at Guantanamo Bay, in Cuba in connection with the terrorist attacks of 11 September 2001, concluded that the high value inmate was mentally incompetent, […]”

[..] Xavier Amador, professor at Columbia University, a interviewé Ramzi Binalshibh, […] he determined that Binalshibh [bin al-Shibh] born did not understand the proceedings against him and suffered from delirium, […]

“He was held for years in secret CIA prisons.

Or, he was subjected to “enhanced interrogation techniques” that human rights defenders have called torture.”

“Previously, prosecutors told court that Binalshibh was suffering from mental health problems and took a variety of drugs for “schizophrenia and / or bipolar disorders“.

‘More, prosecutors said (in their last judicial file), than the psychiatrists who examined him (in the past) thought, that he was fit, to stand trial.’

“One of Binalshibh's previous defense attorneys said, that the Yemeni's stay in CIA detention seems to have contributed to his mental health problems.”

‘Binalshibh has passed four years in detention, to the CIA (From September onwards 2002).’

He languished in prolonged isolation in “black sites” Poland, in Morocco and Romania.

‘According to former CIA officials, it could be provocative and petulant.’

The CIA Inspector General's report on the program states the following..

‘In secret prisons, inmates were exposed to interrogation techniques, which were ‘designed to psychologically disrupt‘ the detainee; maximize your feeling of vulnerability and helplessness; and reduce or eliminate their will to resist.’

‘Saccording to a court document, uncensored got in 2009, by the Washington Post, athe moment Binalshibh landed at Guantanamo Bay in 2006, he had problems.‘

“The next month, lafter a follow-up visit with Binalshibh, the doctor reported that the inmate could not sleep “day or night”, due to problems he suffered in another establishment.

And, that he complained about ‘noises, light odors and vibrations’.”

“In January 2007, his condition isst worsen. And, the same doctor submitted a memorandum requesting that Binalshibh receive antipsychotic drugs without their consent.”

“The Navy doctor said, that Binalshibh suffered from delusional disorder, for which he does not have “no idea”. Which means that’maybe he didn't know he was mentally ill.”

The Convention against Torture and Other Cruel Treatment or Punishment, inhuman or degrading is a treaty of international human rights law.

It was adopted, within the framework of the United Nations, aimed at preventing torture all over the world.

They dictate the rules of conduct to be adopted in times of armed conflict, especially, for the protection of civilians, humanitarian aid workers, wounded or, prisoners of war.

None of these conventions applied for its detained prisoners, in these “prisons”.

People can be kidnapped, with reasons or not, and be tortured with impunity?

For what reasons are prisoners being held for years, in secret CIA prisons?

And, without having the right to an adequate defense?

Even if a person comes home with all their mental capacities, in this kind of prison, it is difficult for her, not to suffer any consequences.

Evidence that is not?

And, ‘He brought out the Binalshibh tapes.”

The government has twice denied having such tapes; retracting once, that they were discovered.”

“If the recordings have surfaced, during the Binalshibh trial, they could highlight the role of Morocco, in a program to fight terrorism […], who authorized the CIA, to detain terrorists, in secret prisons and transfer them to other countries.’

It is "Known as Greystone".

'Most, this case could only be done because of the unusual nature of the Moroccan prison, which was largely funded by the CIA, but led by Moroccans, former CIA officials said.”

“Morocco has never recognized the existence of a detention center.”

“Morocco has a history of prison abuse and human rights violations.

‘But the recordings, according to officials, make no mention of the plot, of 11 September.’

It is not known who made the recordings or how they got to the agency's headquarters.”

“Since moving to Guantanamo, Binalshibh appeared more and more erratic.

Court records say he broke cameras in his cell and smeared them with excrement.”

‘According to court records and interviews, he experienced delusions.‘

And, 'he's complaining, that the CIA was intentionally shaking his bed and his cell.’

He imagined tingling sensations, suspecting that things were crawling on him.

And, the developed a nervous tic, obsessively scratching.”

“Nine years after his capture, nothing indicates that Binalshibh and other terrorists [..] will face military or civilian trials.”

“While, the recordings could affect any trial in the future, Binalshibh, other accused of 11 September and the conspirators openly admitted their roles, praising the attacks.”

“Binalshibh and the others asked to plead guilty.

A decision that would put an end to any trial.

And, she would certainly ensure that videotapes are never shown, in court.”

‘So we don't learn, that these are interrogations, than Binalshibh a subit;

More, that there is no mention of the conspiracy of 11 September'.

And, ‘They don't know who made the recordings‘; and ‘nor how they landed under a CIA office ".

Good, that's great. One of America's best-known intelligence agencies, and ‘recognized’ as being the best performing in the world does not know who is doing his interrogations.

No better, anyone can leave files lying around their offices.

The United States is a party to the Geneva Conventions.

“The United States is a party to the Geneva Conventions.

Cit is rules governing the treatment of persons captured during armed conflict.

Every captured fighter has the right to humane treatment, understood as having to at least understand a rudimentary shelter, clothes, food and medical assistance.

Moreover, no inmate, even if he is suspected of war crimes, such as the killing of civilians, must not be subjected to torture, to bodily sanctions, or humiliating or degrading treatment.

If captured combatants are prosecuted for common law crimes, the trial must meet certain fundamental guarantees, for due process.”

In the name of democracy?

Presumably, this intelligence agency just normalized lying, the murder, the torture, the secret, mistrust of foreign governments, and mistrust of one's own government.

We know what she did on behalf of the United States of America and her ”legendary” democracy.

More, this agency doesn't even do it for America.

And it all started long before Guantanamo … They didn't stop the program … And, they are still in office.

All the bad, mean and horrible things don't just happen in the movies.

[Here is a summary story].

Five people were kept awake with gas .. They would be free if they did not sleep for 30 days …

The tenth day, they howled and howled. …

There was complete silence, no sounds from inside ...

The researchers are surprised.

'Cause they heard no sound, inside.

The morning of the 14th day, the researchers used the intercom to get a response.

"GO BACK, GET AWAY FROM THE DOOR. WE OPEN THE BEDROOM DOORS AND GO INSIDE TO TEST THE MICROPHONES.

YOU ARE INVITED TO LIE FLAT ON THE GROUND, IF YOU DON'T OBEY THE ORDER, YOU WILL BE DEFEATED.

COMPLY WITH, YOU WILL GAIN FREEDOM. ”

Soon a calm response came from within:

"WE NO LONGER WANT TO BE RELEASED».

The fifteenth day, … they opened the room.

When they entered the room.

They saw, that four of the five subjects were still breathing.

More .. none of them were fit to be called 'living’.

They saw, than the food ration, of the last five days, hadn't been touched.

The flesh of the thighs, of the dead subject, was missing, and her chest was sunk in the drain …

Much of the muscle and skin of the four subjects living from test.

When, the soldiers tried to get them out, they resorted to violence.

They don't want to be released.

They fight fiercely against the soldiers.

The prisoners slit the throat of one of the soldiers.

One of the prisoners severed the artery in a soldier's leg by biting him. …

Surgeries were performed on the two test subjects.

More, without anesthesia because they can't stop laughing.

When the researchers asked them, why they had torn off such part?

And why they wanted to come back to the room again?

"I MUST STAY AWAKEN."

The operations commander offered, the other two test subjects and the three researchers, to be sealed inside the room.

One of the researchers shot the commander. Then, he killed the dumb test subject.

The researcher aimed his gun at the last test subject.

He yelled at her and said:

"DID YOU FORGET SO EASILY?»

After hearing this, the researcher paused and shot the subject in the heart.

As the subject closed his eyes.

Is this story true?

There are some who say, that it's a bit of supernatural fiction, that has spread on the Internet.

After, to have appeared on a site.

In Kandahar, the US military subjected me to electric shocks, in stressful positions, to drowning simulations and endless beating. … there was also psychological torture (…) Most current prisoners stay at Guantanamo because they are from Yemen and the US refuses to send them home. Many are as innocent as me. But they have been tortured at Guantanamo for more than 12 years because of their nationality, and not because of everything they've done. "

Michel Rocard wants the supremacy of multinationals over peoples

Obama's Role in the New World Order by Henry Kissinger