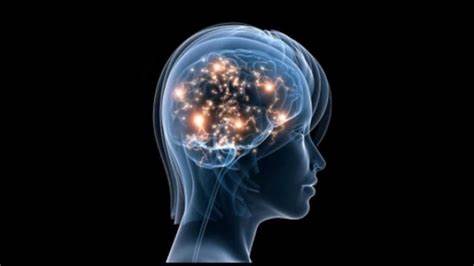 This article is from State of the Nation [SOTN].

According to SOTN the flu is not contagious; but COVID-19 is more of an armed coronavirus hybrid that has been bio-engineered to be highly contagious and debilitating.

As many SOTN readers know, this platform has a much broader view of the global coronavirus outbreaks than the article published below.

While the title of this article states that "the flu is not contagious", the new Wuhan coronavirus is NOT just an influenza virus ... or an influenza pathogen ... or even a typical coronavirus.

On the contrary, COVID-19 is an armed coronavirus hybrid that has been bio-engineered to be highly contagious and debilitating. This bioweapon is stealthily launched into heavily populated areas where 5G has been extensively deployed, specific formulations of chemtrail aerosols were sprayed and influenza vaccination programs were administered aggressively.

In this way, very favorable circumstances were deliberately created to trigger coronavirus cluster blasts in Wuhan, Milan, Seattle and the greater New York area. COVID-19 is specifically used to cause the perfect storm via hidden acts of bioterrorism.

See these two presentations for more details on this complex criminal planning and cover-up..

However, The following Firstenberg article provides a very important piece of the COVID-19 pandemic puzzle that cannot be ignored.

The link between the worsening annual flu seasons and the intensified electrification of all planetary civilization should be understood by all..

A LOT remains to be gleaned from this fascinating historical analysis originally proposed by A. Firstenberg.

A story of electricity and life

The flu is not contagious.

This quarantine is all a horrible hoax, deliberately inflicted on the world to inaugurate a totalitarian world government.

• The flu is an electrical disease. The trigger?

Firstenberg writes, influenza is an electrical illness linked to seasonal variations in solar radiation, as many have suggested over the past two centuries.

Long ago, reports have shown that flu epidemics tend to occur during years of peak solar activity, and that cases can increase and decrease with the number of sunspots.

Famous thinkers have linked the flu to sunspots range from Noah Webster to Fred Hoyle.

In 1836, Heinrich Schweich observed that it is widely believed that the build-up of electricity in the body causes the flu.

His claim has never been refuted, Firstenberg reports.

The period of 1645 at 1715 is known as the Maunder minimum, where no sunspot or dawn has been observed.

There was also no global pandemic. It's only by 1727 that the sunspots were over 100, for the first time in over a century. In 1728, the flu arrived in waves above the earth's surface and has been reported to have lasted until 1738. Some 2 million people died, writes Firstenberg.

The pandemic of 1889-94 swept the entire planet. Firstenberg theorizes this accompanied the planet's first electrification with electric lights on everywhere.

A litany of quotes from the past two centuries all testify to the connection between global influenza outbreaks and the solar cycle.

Firstenberg targets the beginnings of a wrong diagnosis of a disease formerly called neurasthenia, or electrical sensitivity, to Sigmund Freud, who classified it as an "anxiety neurosis" in 1894, thus ending research into the electrical causes of influenza. (My remark: manipulation? uhm ..)

"Thanks to him", writes Firstenberg, "Today we put millions of people on Xanax, Prozac and Zoloft instead of cleaning up the environment. "

So, all these current discussions on "social distancing", quarantines and business closures are deliberate shamings by medical charlatans who ravaged the population with poisoned vaccines for the disease caused by electrical sensitivity.

A thorough investigation followed by arrests and malpractice lawsuits is well underway against the criminals who seek to destroy the governments of the world with deliberately false information..

Flu shots have been imposed on the public for many decades and Firstenberg's research shows they have always been grossly inappropriate, not to say criminals.

“The Invisible Rainbow” was first published in 2017 and has since been reissued in a pocket version by Chelsea Green, based in White River Junction, in Vermont.

A more comprehensive review will follow shortly, but the brakes must be put on this legislative and medical hijacking of the American republic and all the governments of the world by criminal politicians, doctors and billionaires who plan to kill millions of unsuspecting victims with their poisonous vaccines totally unsuitable for electrical sensitivity disease.

They have become a cash cow for unscrupulous vaccine makers.

Firstenberg also wrote that several prominent virologists over the year admitted that vaccination did nothing to stop epidemics and that the disease still behaved as it did a thousand years ago..

“The embarrassing secret among virologists is that 1933 nowadays, there have been no experimental studies proving that the flu – either virus or disease is never transmitted from person to person through normal contact.”

In September 1918, tens of millions of people died from the so-called Spanish flu, but there is no evidence that it was caused by the contagion. There were nosebleeds and blood hemorrhages. The blood was not clotting and there was a lot of hair loss due to the world’s unprecedented use of radio waves.

Many attempts have been made to make it contagious, but they all failed.

1889, the harmonic radiation of the power line begins.

These are the important times when significant changes have been made to the Earth's electric field. Each was accompanied by a major influenza pandemic. And whenever the public has been deceived by bogus attempts at vaccines that were guaranteed not to work.

[Project which will be reviewed when this report continues in the section 2.]

In the meantime, measures imposed on the peoples of the world on the basis of false information from unscrupulous doctors and politicians must be immediately reversed. Life must return to normal and those responsible for this totalitarian abuse fiasco must be punished with all the rigor of the law.

Social distancing, quarantine, business closures are absolutely unnecessary because flu is not contagious. The dismissive medical community played a joke on an ignorant public in order to turn the freedom-loving American way of life into an evil Communist concentration camp, apparently with an idea to reduce the population with totally unnecessary poisonous vaccines.

Spread this news everywhere. Hurry up.

And the forces of evil are deployed against all mankind, with the power of corrupt media and redeemed politicians all ready to end freedom with this cynical barrage of blatant lies that has disturbed the whole world and left its people terrified. For this hoax, there is no forgiveness.

I do not endorse any articles published on the State of the Nation site as information from other sources may supplement them., question them or clarify the subjects exposed.

For information fig. attached for France.

Anyone who is interested in the effects of electricity, including that of meteorological phenomena, on human biology will be passionate about this book. With its 135 reference pages, it is probably the most comprehensive but also the most original general public work published to date on the effects of electromagnetic fields (CEM).

Firstenberg is a scientist and journalist at the forefront of a global movement to debunk the taboo surrounding this topic. Of 1978 at 1982, this Cornell University math graduate attended the Irvine School of Medicine (University of California). This is where an x-ray overdose destroyed his medical career. Since 30 years, he is a researcher, consultant and lecturer on the effects of EMFs on health and the environment, as well as a practitioner of several healing arts.

“The history of the invention and use of electricity has often been presented, but never from an environmental point of view. The presumption of safety and the belief that electricity has nothing to do with life are now so deeply ingrained in the human psyche that new research and testimonies from those injured by EMFs are not enough to change the situation. course that the company has set up, explains the back cover of his book.

Two increasingly isolated worlds - one inhabited by the majority, that embrace new wireless technologies without questioning, and the other inhabited by a growing minority struggling for survival in an electrically polluted environment - don't even speak the same language anymore. Dans The Invisible Rainbow, Arthur Firstenberg connects these two worlds. In a rigorously scientific but easy to read story, it provides a surprising answer to the following question : how can electricity suddenly be harmful today when it was safe for centuries? »

His work is most instructive. We learn in particular :

• that biometeorologists know that 30 % of the population is sensitive to changes in climate electricity and that this sensitivity has been documented since 5 000 years;

• that the acupuncturist's needles conduct atmospheric electricity to stimulate the meridians;

• by repeatedly exposing yourself to static electricity, Benjamin Franklin had developed painful electrohypersensitivity;

• that the diagnosis of anxiety arose in 1866 as telegraph wires circled the globe, that the first influenza epidemics occurred in 1889 after the invention of alternating current which transformed the status of diabetes, rare to common heart disease and cancer;

• that in some people earthquakes cause the same symptoms associated with electrification, British physicist William Stukeley reported in 1749;

• what 12 % people can hear weak electric currents, affirmed the otologist Auguste Morel in 1892;

• what 80 % electrosensitive patients of doctor Gad Sulman, Director of the Bioclimatology Unit at Hadassah University Medical Center, in Jerusalem, predicted the weather changes of 12 at 48 hours in advance, because the atmospheric ions modify the brain production of serotonin, neurotransmitter responsible for mood. "We are causing a grave injustice to electrosensitive patients by treating them like psychiatric patients", he wrote in 1980 dans son livre The Effects of Air Ionization, Electric Fields, Atmospherics and Other Electric Phenomena on Man and Animal (Charles C. Thomas, Springfield, III, 1980, 400 p.);

• that the neurasthénie (nervous weakness), named in 1869 by neurologist George Miller Beard who collaborated with Edison in his discovery of high frequency electricity, was renamed "anxiety neurosis" by Sigmund Freud in 1895; but the Russians rejected this re-definition : neurasthenia, still one of the most common diagnoses in Asia, is due to chronic chemical and electromagnetic toxicity.

It has reached epidemic proportions since the electrification that took place in the years 1880 and this nervous imbalance is one of the first symptoms of the "microwave disease" discovered by the Russians in 1930;

• a cell phone, which can in the long run in particular cause tinnitus, deposit 360 joules of energy in a brain per hour of exposure, compared to 150 joules for the electric battery with which Volta caused hearing sensation by attaching it to an ear with electrodes;

• that animals and plants are as sensitive as we are to EMFs and that very weak electrical currents affect their growth and function.

Find out more, read the history of electrohypersensitivity published by Firstenberg on his site cellphonetaskforce.org. He says there that in the years 1950, several clinics were opened in the Warsaw Pact countries to treat cases of microwave disease which claimed thousands of workers exposed to microwaves.

“I found it to be a mystery unfolding and I couldn't denounce it. This book is very, Very important.”

“As a doctor, I found it hard to suppress.”

“Just as Rachel Carson’s Silent Spring warned the mid-twentieth century of the dangers of indiscriminate use of chemicals and pesticides, Invisible Rainbow: A History of Electricity and Life d’ Arthur Firstenberg provides a comprehensive analysis of the dangers of the proliferation of electricity and exposure to its electromagnetic radiation. .”

This article is for guidance only.

But find and check for yourself. 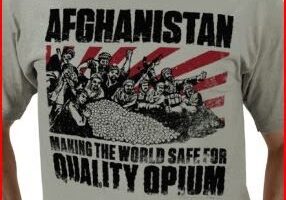 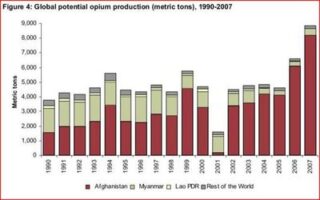 Operation Opium and the war in Afghanistan 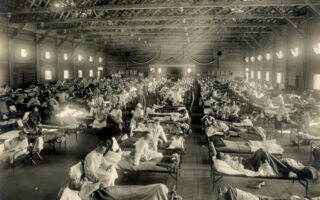 Did an experimental military vaccine kill in 1918, 50 at 100 million people accusing “spanish flu”?